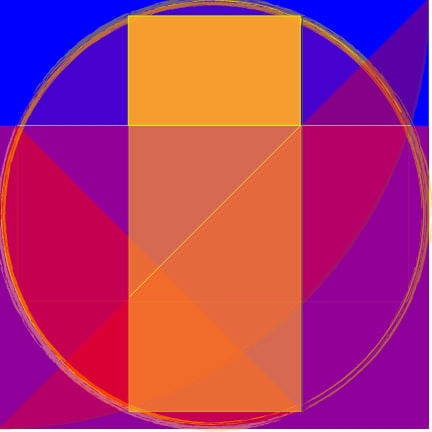 In teaching Art History I became aware that with church architecture early on and through the Gothic era, there was a similarity in floor plans and architecture. There were master builders who devised the plan and oversaw the construction. being interested in geometry it was only natural to wonder if there wasn’t some basic module they all knew and could pass along. It had to be simple and it had to have built in, a variety of application.

The first major structure was Hagia Sophia and it is known that a geometer and an engineer from the University of Athens supervised the work. I knew by re-constituting the floor plan that the central square was surrounded by four phi (“golden”) rectangles which were then squared.

The way plans were developed was from the center outward- “to the corners”. It was the same for basilicas (equal arms about a central square) and for nave churches (elongated east-west axis).

My set of 12 “To the Corners” reflect how the geometry can be varied to create very different appearances. Lurking about is the geometric construction of the “Beatus” which is evident in medieval illuminations.

“Ad Quad 1” is a straightforward presentation of what a geometer can do with a square. Some interesting things begin to appear.